I've been challenged to do a session at a very large conference around women in programming. Which leads to two reactions from me 1) wow, what an honour! and 2) sigh.

END_OF_DOCUMENT_TOKEN_TO_BE_REPLACED

Continuing the theme of Things I Have Heard I Don't Think I Agree With.

To developers technologies are everything

I can't remember the context of this, but I hear the same sentiment in different guises over and over again. Often from non-techies, but more alarmingly from developers.

It's true for a certain tribe of techies, sure. And creating and effectively using new technologies is an important part of what drives the current information age forward. But I'd be worried if I thought that 99% of developers were like this.

In our day jobs, and also if we want to create something that makes any money, we need to be interested in solving people's problems and creating solutions. Sure, we'll use technology to do that. But if we were all only motivated by technology, we'd always be trying out the Next Big Thing when our customers wanted a simple CRUD web app. Any organisation that encouraged this sort of technology um, infidelity? playing the field? might find themselves with lots of fascinated and broadly-educated developers, but not a lot of productivity.

I always thought developers were drawn by wrestling with the machine to solve a particular problem, or to do something that hadn't been done before. I didn't think we liked learning Ruby because we didn't study it at university, or switching to a functional language simply because that's the way the whole world is going.

We can train The Business to speak our language

I've heard a number of people talking about the Holy Grail of having business owners write acceptance tests. At LMAX we have a (Java-based) DSL that theoretically could allow technical-ish non-developers to write our automated acceptance tests. However, is this the right thing to do? To make our jobs easier, and our code better quality, we need the business to become almost developers?

Our (very difficult) job as developers is to act as translator between the ones and zeros a computer speaks and the real life doman language our business guys (and girls) use. Forcing the business to become more technical is just, well, lazy.

So if our business people shouldn't be forced to become more technical, how can we bridge the gap? Is there anything that we as developers can do to move closer to the business?

is a good start. When a business user talks about an order, a developer should be thinking about the Order class, or something that implements an Order interface. When the business talks about placing an order, a developer shouldn't be thinking "place order translates into the execute method", they should assume there's a placeOrder method somewhere they can use as a start point.

We certainly shouldn't be training the head of sales to start talking in terms of Java classes or technologies - "I want the Resin tier to validate the order while the OrderMatcherImpl checks for availability". That would be silly.

Development is hard, that's why they pay us. And part of that hard job is learning the business model we're implementing so we can mirror and support the business. We shouldn't be inflicting our technology on the business.

Topping off my mini-tour at the end of May, I was invited to Rotterdam to present to a brand new community of developers. I was really interested in attending because my experience with user groups is pretty much limited to the London Java Community, and I knew this would be different due to being a) across a wider range of technologies and b) shiny and new.

END_OF_DOCUMENT_TOKEN_TO_BE_REPLACED 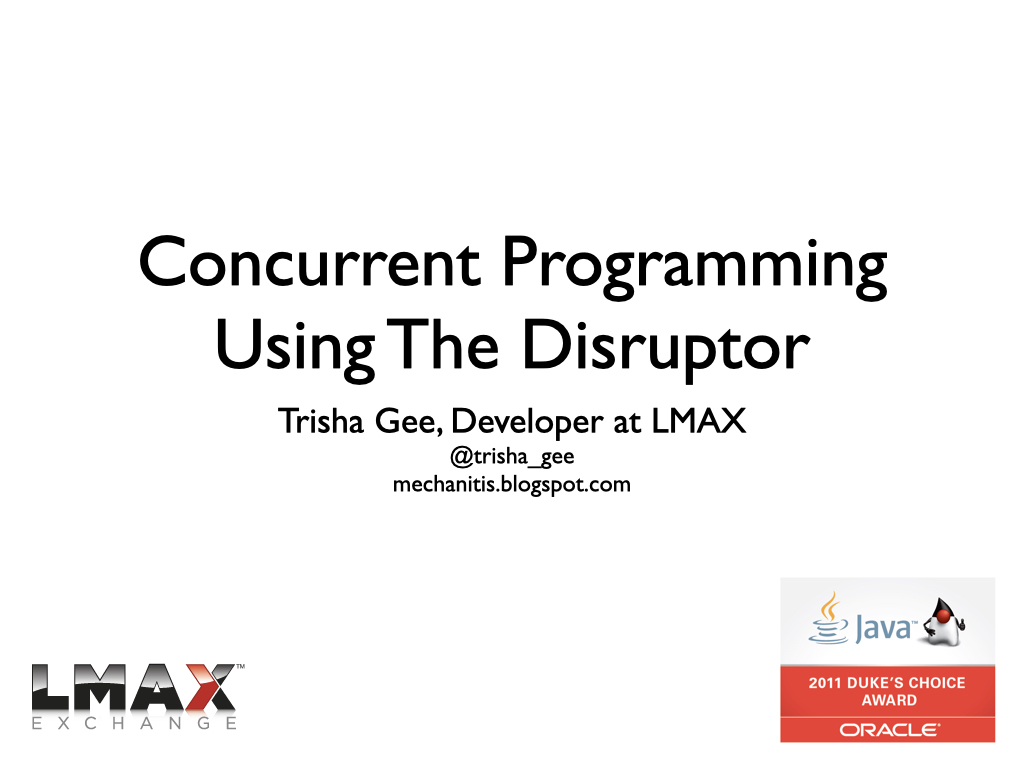 The "User's Guide to the Disruptor" presentation I gave at QCon London is now available on the InfoQ site. This is the same presentation as the one I gave at Skillsmatter in March, but the questions are different. Plus since I'm winging it every time, I probably cover slightly different things or explain some stuff better / worse.