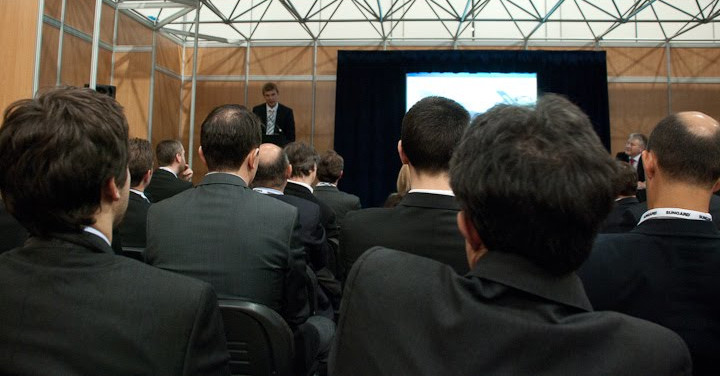 I attended TradeTech last week, an annual event about Equities and Derivatives trading. I assumed from the title that there would be a reasonable focus on technology, but I found it was more “Trade” and less “Tech”.

The fascinating thing to me was how different this is from the sorts of technology conferences I've been to. For example, I popped into JAX this week (albeit in the evening for drinks). At technology conferences (). At this place, people were scarily conformist. A few years back, the suits at least would be different colours – navy, greys and black – and may or may not include pin stripes. On Thuresday, almost everyone was wearing a particular shade of tasteful dark grey.

I was also pretty shocked at the time people snuck off to go to the pub. Don't get me wrong, I'm all in favour of imbibing alcoholic beverages as frequently as possible. And I prefer networking in the pub to poncing around in some conference centre. But I feel it's Bad Form, and I was surprised (and a little bit jealous) that it seemed to be the norm. I felt for all of the later presenters. 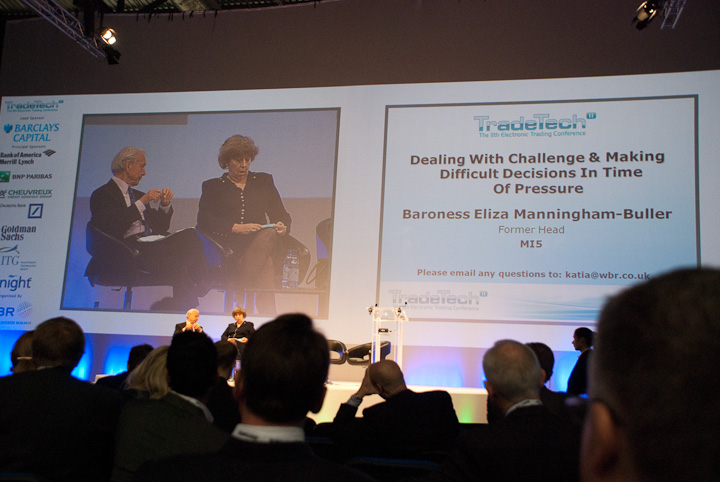 Still, I showed my support for them and I turned up to some actual presentations. The most interesting ones to me were Baroness Eliza Manningham-Buller talking about her time as head of MI5, and Richard Peterson going Inside the Trader's Brain.

The Baroness was talking about leadership during times of crisis – she was in charge shortly after 9/11. What I found interesting, and resonated with me, was her focus on her people. An intelligence organisation is all about the people who work for it. She stressed that it was important to bring fun into the work place, especially because it was a particularly traumatic period to be working. She instigated family days and helped the employees show their families what it was they did. I'm not quite sure how much they could show, given the nature of that industry. But I liked that she understood the people were more than just minions, workers in a hive, that they had families and that they wanted to be proud of their work and share it with the significant people in their lives.

She also refused to take credit for anything for herself, but talked about her team, about the people around her and in the organisation. I like leaders who recognise that it's not all about them.

The thing that stuck with me the most is she said that leaders who take themselves too seriously are not taken seriously by their underlings. 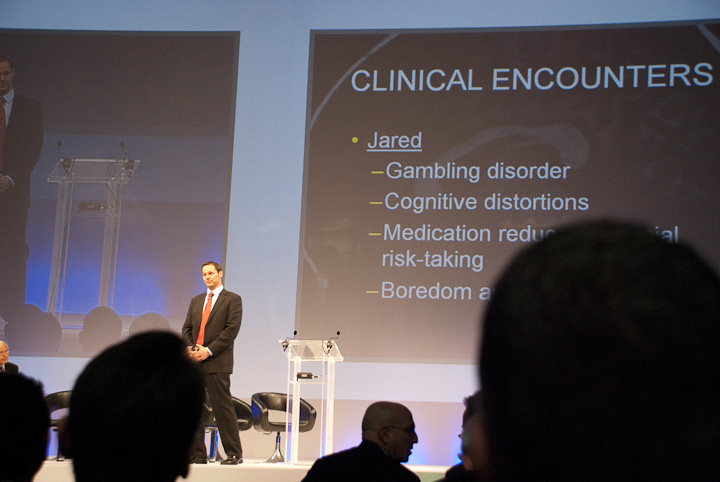 Richard Peterson's presentation was about the risk-taking and risk-avoidance areas of the brain. He showed how your risk-taking behaviour is influenced by bias, and how subtle it is. There was a lot of interesting stuff in this, which scratches my random-interest-in-psychology itch, and confirms what I've been reading/hearing about how behaviour can be triggered and changed.

Ultimately he gave some advice for how to reduce the impact the rest of the world might have on your trading strategy, which is applicable to all of us:

The ulterior motive for me to be at TradeTech was to watch my boss's “How To Do 100,000 Transactions Per Second At Less Than 1 Millisecond Latency?” presentation. This was a cut-down and updated version of the one he and Mike gave at QCon last year. If you are at all interested in concurrency, high performance, or programming generally, it's well worth the hour to watch it. It outlines the architecture we use at LMAX to get very high performance from our exchange without using anything particularly special in terms of hardware. All it takes is good design and something Martin calls mechanical sympathy.

Overall I came back from TradeTech with lots of ideas of things I wanted to do at work and ways to help us market the platform in future. I also came back with a certain cynicism for these types of very vendor-heavy events. However, I did meet some interesting people, and it was a different crowd to my usual technical comfort zone.

And it did get me thinking, which is really all these things should do.