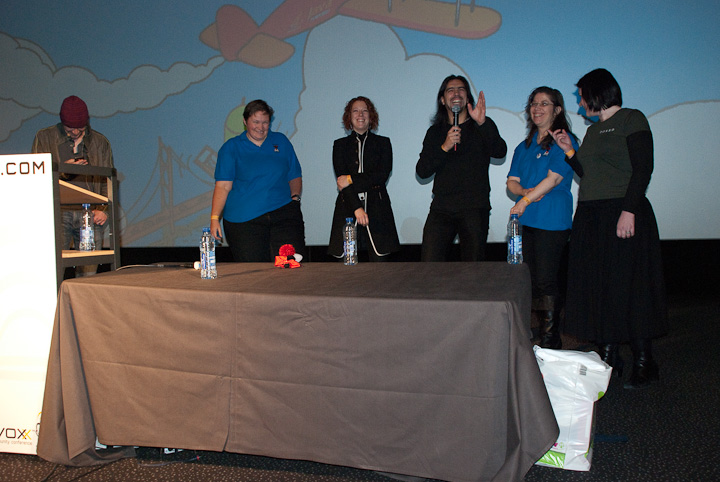 I'd love to make a note of all the issues discussed during the hour, but I'll be honest, I was too busy trying not to fall over in my girly six-inch stiletto boots to remember anything that happened. The video will hopefully be available on Parleys some time in the future, so I will link to it when it's there if it's not too horribly embarrassing. 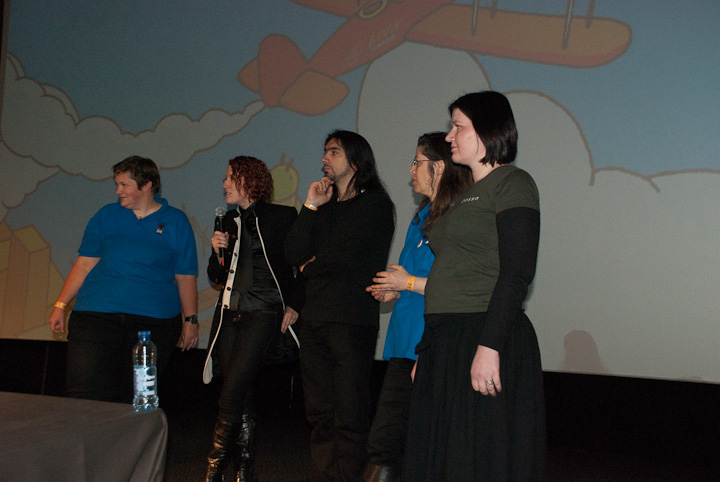 Someone let me have the microphone again...

One question that came up more than once throughout the week was: IT/programming is not the only industry with a lack of women, why should we care? Maybe it's just natural?

I think we need to be very careful before writing off such an imbalance as "natural". We need to make sure first that we aren't discriminating against groups, consciously or through some unnoticed system bias. And for me, the thing is that we notice that women aren't well represented in technical roles, but we don't necessarily notice the other groups of people who might be being put off for similar (or maybe totally different) reasons. We can't so easily tell if gays, jews, parents, shy people, folks from poor backgrounds or any other less distinguishable sets of people are finding it hard to make it as a programmer.

The thing that worries me about these figures are a) the "pipeline" hints at a drop-off in interest in the subject, not a lack of ability, since the girls are doing well tech subjects but choose not to pursue them and b) the numbers are declining in some areas, specifically university applications. I've read studies that show the percentage of those in technical jobs who are women has been steadily declining since the 80s, but it's difficult to get specific figures, especially as I'm particularly interested in programming / technical roles rather than just the percentage of women "in IT".

If the numbers are declining, that seems like a smell to me. Not only do we have some sort of image problem which puts people like those who have two X chromosomes off from entering our industry, we're driving them away when they get here. And I don't believe that's because women find they're not good at it.

Other industries have been successful at attracting a higher proportion of women - for example, in 1950, only 15% of accountants were women. By 1985 half of all accounting majors were women, and by 1990 the majority of the workforce was female. It would be nice to think we could learn something from our friends in the Maths world. After all, the skills are not dissimilar. But they have a slight advantage over us - in many countries all children are required to study maths until age 16. However, there are very few 16-year-olds who have any programming experience at all. Either we need to accept that we're going to have to hire kids with other degrees and train them to be programmers, or we're going to have to do some serious outreach to interest kids in programming and technology long before they start to make their exam choices. In the UK, they need to choose their GCSE subjects at 14, which means we probably need to be targeting kids as young as 10 or 11. That's not inconceivable, when you think about it - how many of us were programming in BASIC aged eight or nine? Could we not teach kids to write an iPhone app or a Facebook app instead? I was very pleased to hear someone in our audience was teaching their daughter to program. At an even younger age, the least you can do is buy your kids Lego - I'm sure that exercises the right parts of the brain.

The point is, that I don't think we can conclude that it's "natural" for girls to not be interested in programming. The first programmer was a woman, and during the war and even into the '60s many programmers were women. I think that if we can work with schools to provide some tutoring in computing at a younger age we might be able to attract kids who wouldn't have thought about programming as a career choice before. Some of these may be women, some will not. That's fine, diversity is our ultimate goal.

Which leads me onto another point - special treatment of women. I've said it before I'm sure - I think singling out women to attempt to increase their numbers does more harm than good, for a number of reasons:

Some of the ideas that imply special treatment are things like: all women events (you should know by now how I feel about those); free entry to conferences for women; higher pay for women at certain companies. Although I would benefit from all of these things, I hate them. I feel like I'm being compensated for this terrible affliction of being born female.

Since the panel I've been pointed, numerous times, to this excellent article which talks about racism, sexism, and meritocracies. I particularly like the line "Explicit diversity programs have the solution exactly backwards". Well worth a read.