I’ve been running into BSkyB a bunch this week - firstly I was invited to kick off their innovation tech talks series last Monday, then I kept meeting Sky people (that makes it sound like they’re aliens) at QCon.

It seems Sky is keen to create/foster a culture of innovation, which is an ambitious goal for such a large company. So I was given a very vague brief for Monday’s presentation (“Can you do something Mongo-ish, maybe a bit of performance and concurrency stuff, and talk about overall best practice?”) I gave them an early view of a presentation I’m working on titled something like “Why do we keep reinventing the wheel?” (anyone who saw me at JFokus might realise that I cunningly swapped out most of the body of the “What do you mean, backwards compatibility?” talk and tried out this topic instead). 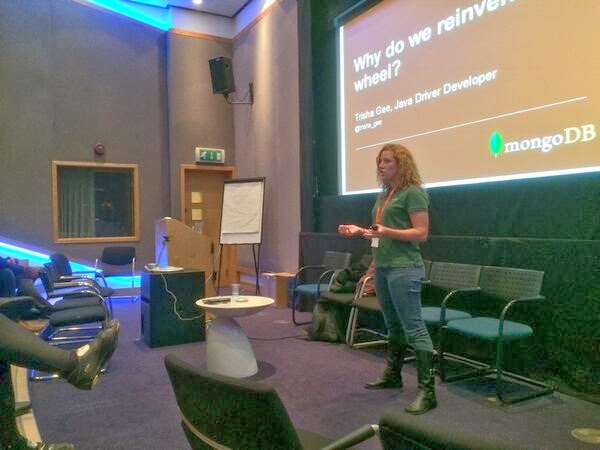 This was supposed to be a 20 minute intro talk (OK, so I clocked it at 40 minutes in rehearsal) with the rest of the time devoted to questions on any subject I know about, or even anything I have an opinion on. Sounds dangerous, but means I can always move fast on the answers I don’t know in order to cover more ground - cunning, you see? Actually, that sounds like it would be more fun if alcohol were involved.

Anyway. The talk bit of the session took up most of the time, because I had really good questions during the course of the presentation. It’s nice to talk to a much smaller group (there were maybe 30ish people, giving up their free time after work, like an internal user group). But I also had questions on remote working, on creating a culture that’s appealing for developers to come and work in, and on MongoDB.

I don’t know how many companies do things like this, or lunchtime brown bags, or something, but I think they’re a great idea. This was a mix of people from different departments, different teams, working on different technologies. It was a good way to get people from across the organisation talking with each other and sharing best practice between teams. Many organisations have people working in their little silo, and we (MongoDB) often find ourselves introducing teams from within the same organisation to each other - there’s no other mechanism for one team to find out about the other. I guess that’s what white-tower architects were supposed to be for - to know what everyone’s up to and make sure people are doing the “right” thing. Given this doesn’t seem to work, what else can we do to share knowledge internally? How else can we get the right people to meet each other?