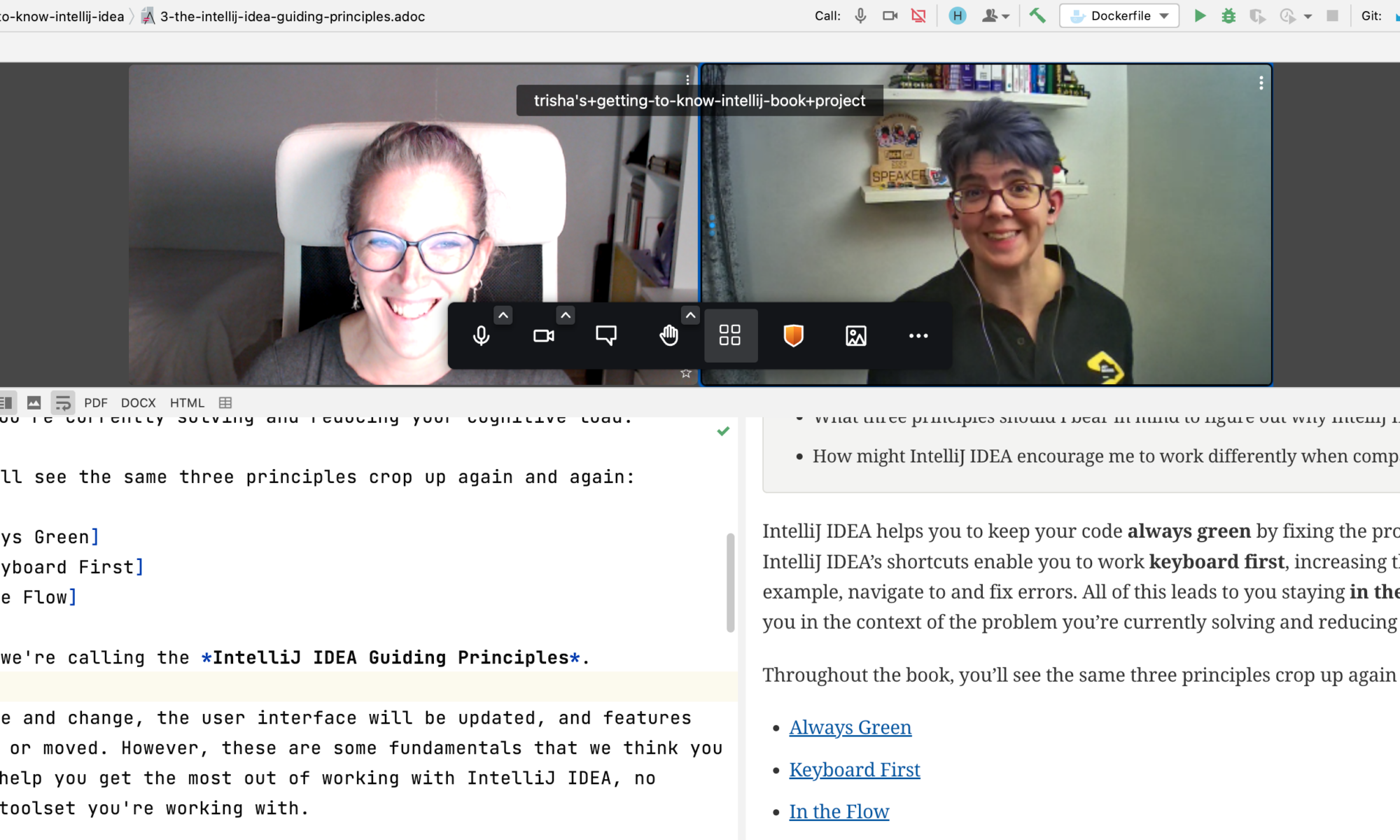 My last post was about the history of writing Getting to Know IntelliJ IDEA. Which was mostly for my own gratification, to help me realise just how much time and energy went into it. What people mostly ask me about, though, is the tools we used to write the book and the process we used to collaborate.

We wanted to use Leanpub to publish the book, because the royalties are generous, and we felt we could manage everything ourselves. It turns out to have another really nice benefit too, which is we can release updates to the book as soon as we need to, which helps a lot when the product moves as fast as IntelliJ IDEA.

Originally we started writing the book in Markdown (which we had been using for IntelliJ IDEA blogs) and using Leanpub's GitHub writing mode to build the book. We like using Markdown because we can write in IntelliJ IDEA using the built-in Markdown plugin and we can use all the standard editor functionality.

Using Leanpub in this way was going to cost money, and given all our false starts in writing a book, we were reluctant to spend money on something that might not go our way. We did need to be able to render the book quickly, ideally automatically, so we could see what it looked like as we went.

Josh Long suggested using Asciidoc with Asciidoctor, and pointed us to his Bootiful Asciidoctor pipeline, which would get us set up quickly with a book project and a GitHub Actions build pipeline that would build the book's artifacts (PDF, HTML, and ebook) every time we pushed our commits. This appealed to me enormously, I wanted to be able to see the rendered book easily, and I wanted to know quickly if we broke the book with some invalid syntax. This isn't so critical when you're writing a single blog post, because you can usually tell straight away if a single Asciidoc or Markdown file is incorrect, but when you pull them altogether with includes, code files, and images, it's much easier to accidentally break the book and not notice. Josh's pipeline supported writing code samples in separate GitHub repositories, which we could make public, and include the code in the book. This is exactly what we wanted.

A major selling point to us was that we could use the AsciiDoc IntelliJ IDEA plugin to write the text in IntelliJ IDEA and get immediate feedback on how the page was going to look. It has inspections which tell you when things are broken, it supports renaming and moving elements without breaking your book. It requires very little configuration to just work, and generally uses the same settings as the ones that are used when you build your book with Asciidoctor.

In the early days, we had a weekly meeting of an hour to sync up. We'd share what we'd done, and work out what we were going to work on the next week. There were some weeks where this hour might be the only hour I worked on the book, but we made steady progress.

Once we had access to JetBrains Code With Me (which we were lucky to have early access to as employees), we spent more time remote-pairing on the book, which was much more motivating than working on it alone.

Our process, once we finally hit our stride, was this:

We got together in person I think three or four times. Covid made that very difficult indeed. Neither of us travelled at all in 2020. When I went there in summer of 2021 we had to squeeze in a big re-org of the whole book (using Actual Bits Of Paper from a printed version of the book) while our husbands entertained my children with the Nintendo Switch. In November 2021, when Helen came to see me, the kids were so sick Helen and I had 3 days of writing the book on our respective laptops in front of the telly while my kids watched Disney+ and tried to rest. Then, when I arranged to visit Helen without children in October 2022 while we were both on "vacation", with the goal of Finally Finishing The Damn Book, she got Covid the week before. We had to remote-pair as usual, only this time I was at my Dad's house and Helen was trying not to cough all over her laptop.

What did we learn

Buy Getting to Know IntelliJ IDEA, and give us feedback on what you learnt!