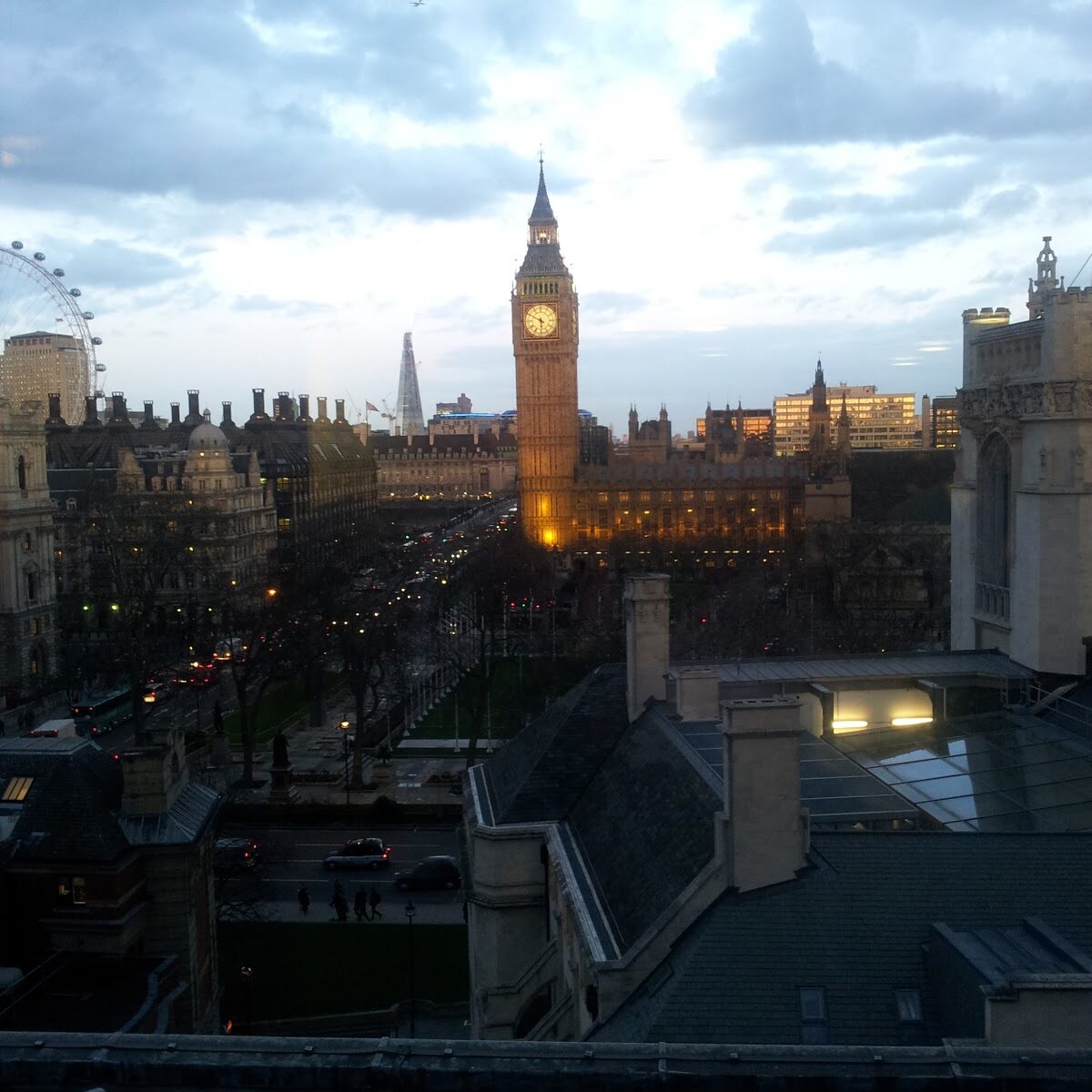 I'm late with my write-up of QCon, and what's worse, it will be partial - "sadly" I was in Lanzarote on a training week with the running club from the Thursday (8th) so I missed most of it. A sacrifice I had to make for 7 days in the sunshine...

Firstly, me me me

I presented the talk I previewed at Skillsmatter the previous week, something I was calling the User's Guide to the Disruptor, but actually turned out to be how-can-Trish-fill-95-slides-with-pictures-and-finish-in-under-40-minutes.

The audience was different to the Skillsmatter event, not surprisingly. What was surprising is that I expected people at the conference to be less aware of the Disruptor, and those who came to the Disruptor-only LJC event to have had more exposure to it. It was a (pleasant) surprise to see how many of the standing-room-only audience had not only heard of the Disruptor but had read stuff about it (I always love it when people have read my blog), played with it and were even using it in anger.

Because of that, I think if anything the talk did not go into enough detail, or enough new stuff, to please everyone. Tough crowd! But it was gratifying to hear the audience correct me in some of my answers, and answer other people's questions - it's always nice to know people are listening.

Of course, I will post a link to the presentation when it's available. For now only the slides are online.

QCon was noticeably different to the other conferences I've been to in the last six months. For one, it's not a Java conference - sure, I was hosted on the Java track, but QCon is wider-ranging than just one technology platform. I'm not sure if it's because of this, or because it was based in the notoriously impatient London, but I felt like there was a message of "Look, let's just get stuff done, OK?". Ultimately we get paid to deliver stuff for the business, and since my favourite question is always "but what are we trying to achieve?" I like to hear ideas around how to actually deliver. Don't get me wrong, I've loved the technology conferences - I like to hear about new stuff I had no idea about, and I really like the community vibe from them. But it's a nice change to be shaken up into thinking exactly why we do all this.

Firstly, Rebecca Parsons and Martin Fowler from my old employer ThoughtWorks put Big Data into perspective. Previously I hadn't really cared about it - we process lots of data at LMAX but we don't really have to dig into it, so Big Data is not top of my "oooh I really worry about that" problems. There were quite a few interesting points I took out of this: 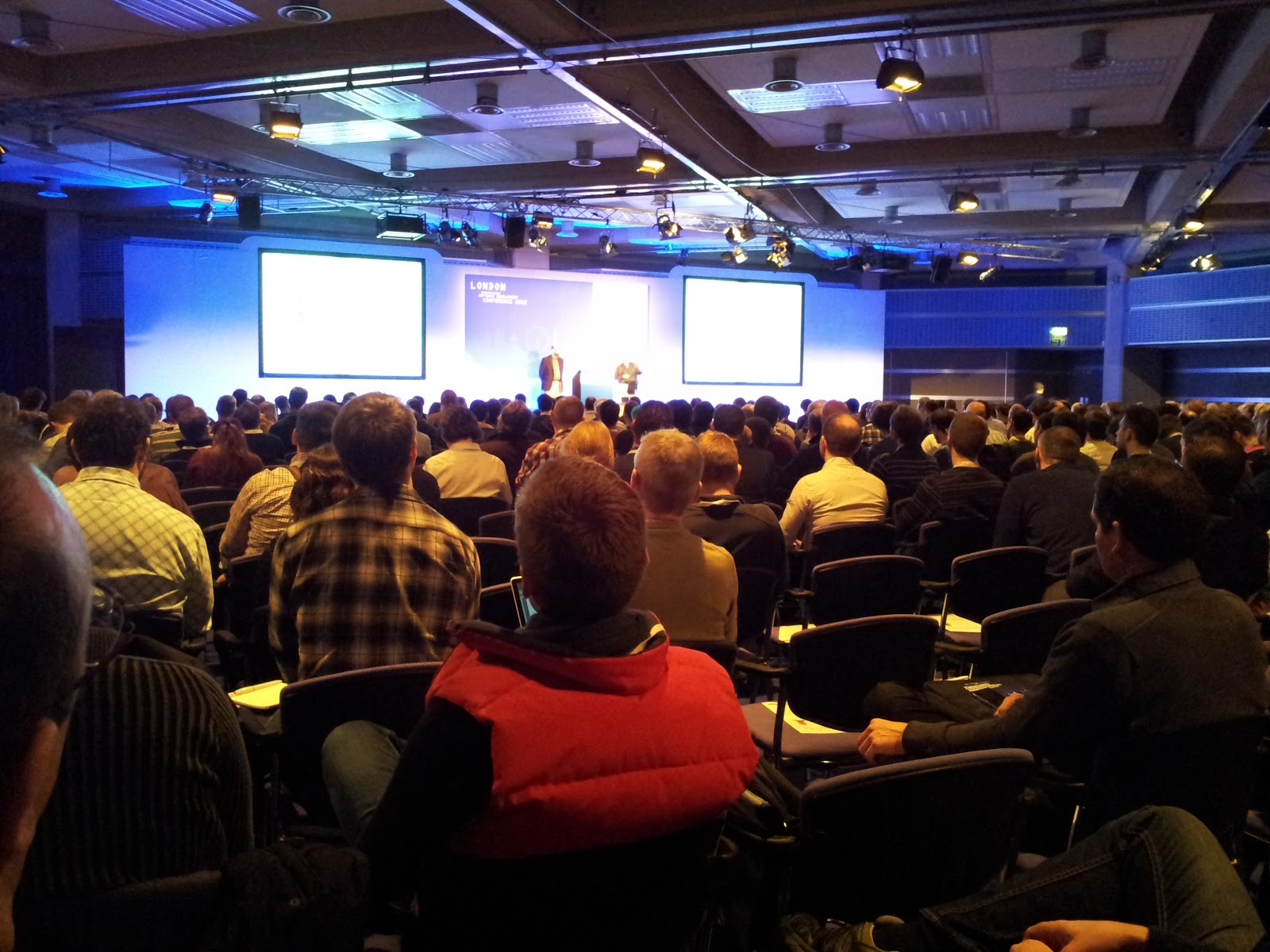 Joe Armstrong was a very interesting person to listen to, clearly someone who's been there and done that. Even without the presentation, the slides are interesting in their own right as they contain a lot of information and guidelines.

The points I took away are:

Dan North was, as always, an excellent speaker. He entertained us but got us all thinking. Five years ago at QCon London (my very first conference ever, and the thing that motivated me to start a professional blog), I saw Dan speaking and I was inspired to think about my working practices. He was talking about BDD at the time, which was a relatively new concept to me. I came away from that QCon with clearer ideas of what awesome development practices should look like. Never did I imagine that five years later, not only would I be working in an environment which follows a lot of those practices (and pioneers many more) but that I would actually be speaking at the same conference. 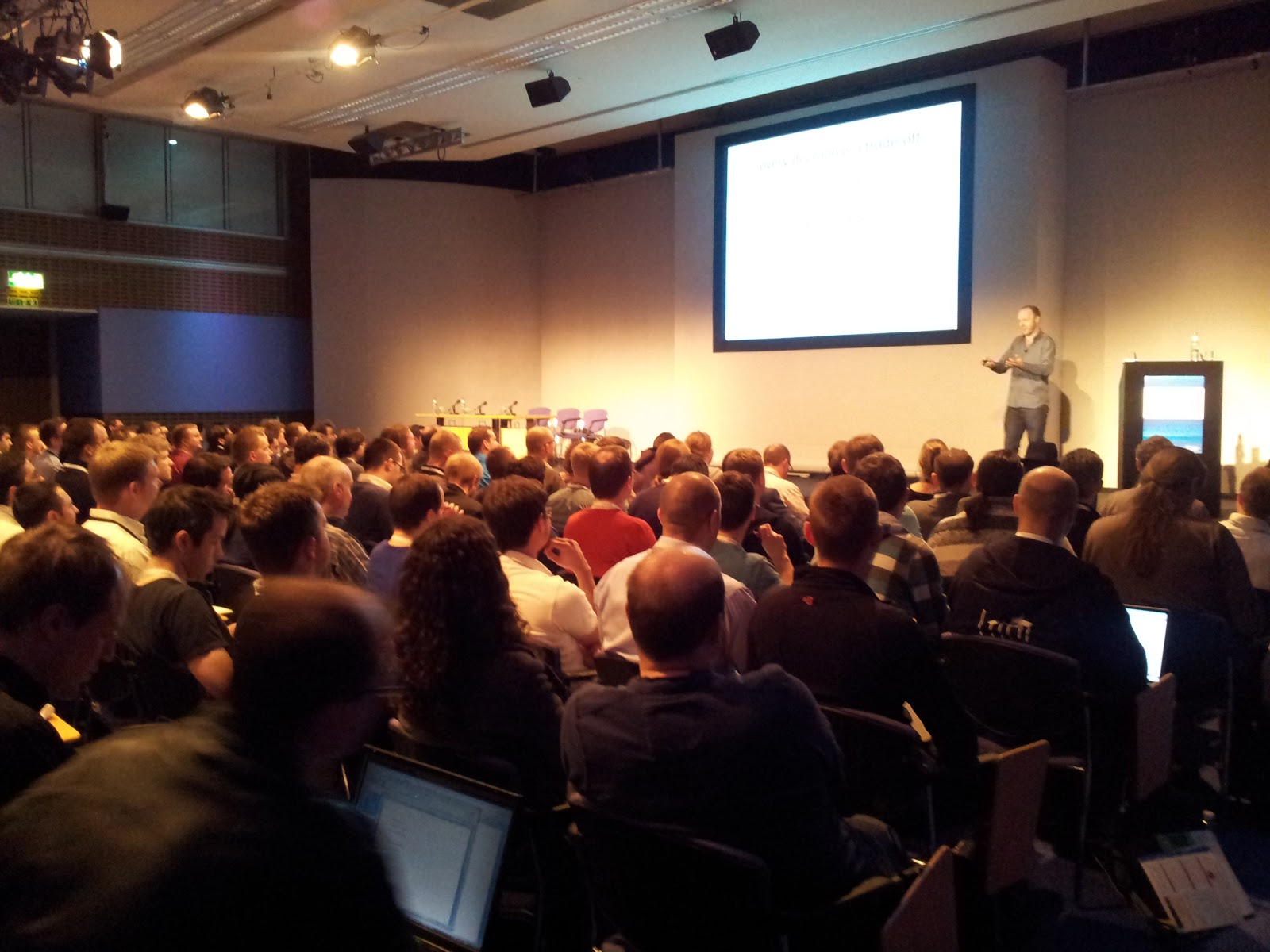 I've come a long way since then, and of course, Dan isn't talking about the same things either. I've been to a lot of conferences this year, and I heard nothing really preaching to the "meta-agile" LMAX (still have a post pending about our agile practices...). When it comes to agile, there seem to be very few people who we can learn off - don't get me wrong, there are lots of things we want to improve on, which is why we're looking for people to learn off. But most people are still preaching TDD and we want to know "what next?".

It was irritating actually because he had no answers. But he did tell us that the answers we think we already have might not be the right ones...

Well worth watching his talk when it comes online, I really can't summarise it here.

Developers Have a Mental Disorder

I nearly missed this ending keynote. I'm so glad I didn't, Greg Young is awesome at ranting. He said developers have a disease - we overcomplicate things, when we try to simplify things. We want to abstract stuff, we love to look for patterns and reuse when actually sometimes we just need to solve the problem.

In my notes I have "People come to conferences for answers, when they should be remembering to use their brains". I assume that's a quote from him, and not a comment I thought of at the time, but I wholeheartedly agree with it - if a shiny new technology solved your problems, you'd be out of a job. Your job is to take the problem and figure out how to solve it. Not to drag and drop an answer into place.

Another talk that I can't do justice to, watch the video when it comes online.

At the end of the day, the Atlassian-sponsored community night was awesome. I got to chat to (be prepared for gratuitous name dropping here) Martin Fowler; my old friend Simon Brown; my ubiquitous LJC colleagues Martijn and John; the Zero Turnaround guys; a couple of ex-colleagues from Evolution / Detica; a heap of LMAX and ex-LMAX guys; and, of course, bundles and bundles of new interesting people.

(i.e the short version for those who can't be bothered to read this whole post)

Maybe it's wishful thinking, but the messages I took from QCon were:

QCon overall turned out to be a bit of an LMAX fest in the end, with Mike & Martin and Andy Stewart (our Chief Lord Business Analyst), all giving presentations there as well as me. It's nice to be on home turf, and it's very cool to see that we have such a range of things to talk about that so many of us are invited to speak.

I just found out there's a QCon in New York. My invitation seems to have got lost in the post. Don't suppose anyone wants me to speak there...?