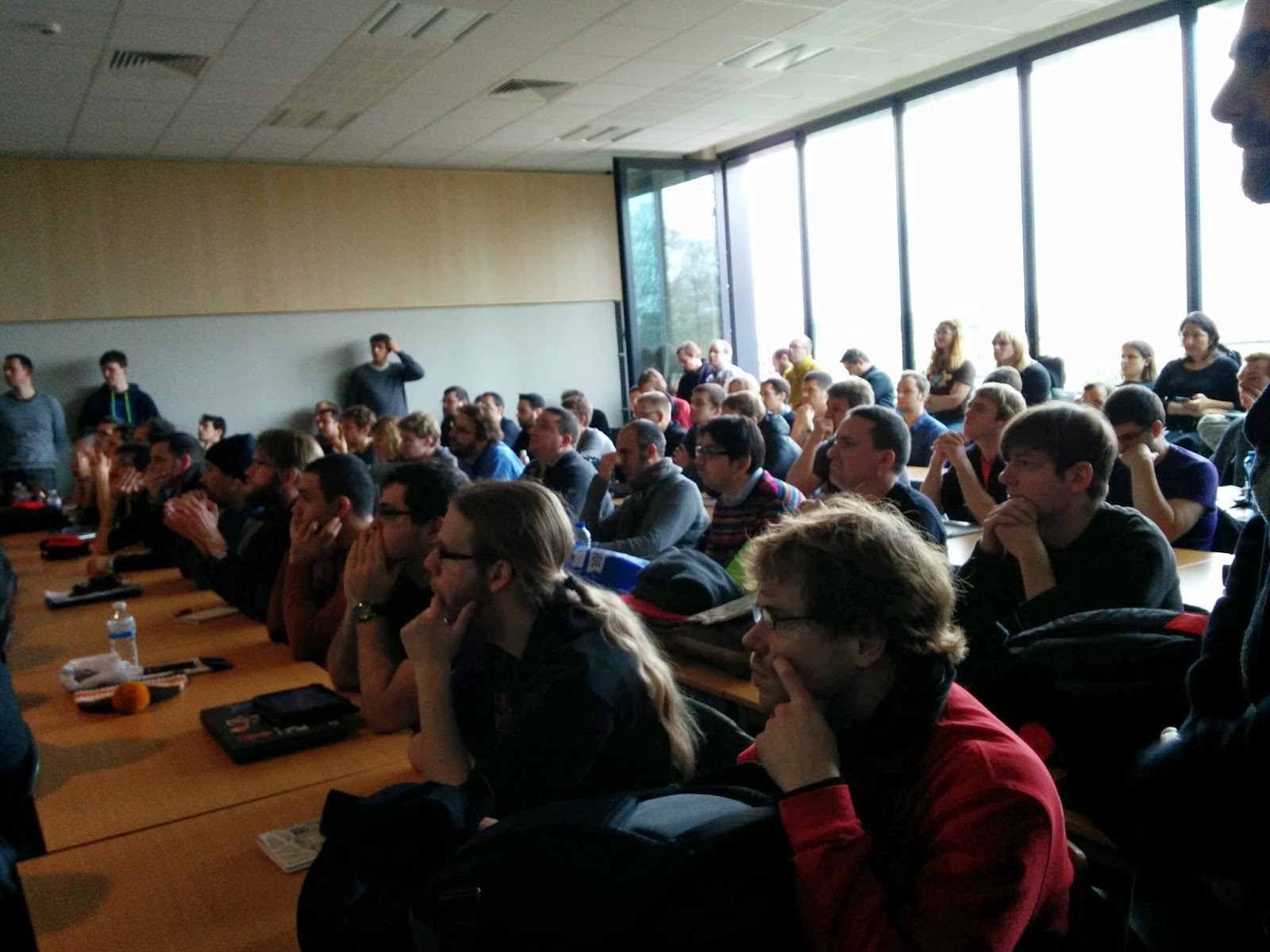 I've heard great things about this conference, so I was pretty exited to go

Now I know people talk about impostor syndrome whenever they mention the woeful lack of diversity at tech conferences. Interestingly, I felt like an impostor at FOSDEM - not because I'm a woman (there were quite a few techy women around at FOSDEM, more than I expected) but because I'm not an open source person.

I mean, I am, technically - MongoDB and the Java driver are both open source, and I have real live code on github. But I didn't get there via the open source community, I was hired to do a specific job that happens to be open source (for which I am extremely grateful). So although I knew the MongoDB folks I was there with and a lot of people who were running or speaking in the Java room, I didn't feel really at home in this conference. I think I feel more comfortable with the ones aimed at enterprise Java developers (by which I mean Java people who work producing software for companies) because this is more similar to my background - I understand the attendees and I think I know what they want.

It's also possible since I've been to a lot more of the enterprise-aimed conferences that I used to feel just as awkward there, and I've become much more comfortable now I've been to many.

Which leads me to another observation: when I first went to JavaOne, in 2011, I felt extremely conspicuous as a woman. I mean, I didn't do much to help, my skirts and shorts are occasionally… not really enterprise-developer-length. But I felt like everyone noticed me and I felt the pressure to assert early on in every new conversation that I was, in fact, a developer and not a booth babe or a recruiter. But these days, I feel much more comfortable. And do you know what's really helped with that? Being a speaker; having my face on the website. I don't have to prove I'm a developer, I was asked to speak at that conference - if the conference organisers think I belong there, then I belong there.

Well, we can do things to combat this I-don't-belong-here feeling - I'm pretty sure we've all been there, regardless of gender, race, background etc. To be honest, us geeks probably feel this more than most humans.

Conferences and user groups and meet ups and so forth can all make life a little easier for those feeling this. At the London Java Community, for example, we started having greeters at the door for our social events, to try and make everyone feel welcomed and to introduce people to each other. I also liked what YOW did - they had a really informal social event at the end of the first day of the conference (with free booze, yay!) which made it relatively easy to mingle with other people. FOSDEM, with its lack of free food and drink gave us less opportunities to mingle with people other than your own friends, although I did like the canteen area for random encounters.

But it's not just down to organisers of groups or events to solve this problem for us. I've found that if you do feel like you don't belong, there's a way to get over that, and it's not to withdraw. It's to get more involved. Find the groups you feel most comfortable with (for me, it started at the LJC), find the medium that you're most comfortable with (in person meet-ups, e-mail, IRC, Twitter, whatever), and join in. Have conversations. Meet people. Once you start to make friends you start to feel like you belong, and when you start to feel like you belong you can step up and do more. You might even find yourself accidentally propelled into speaking at an international conference, and who knows where you find yourself after that? Although I appreciate that's not for everyone. The point is, find your comfort zone for entry and gradually push yourself more - as you find yourself more accepted and respected, you'll feel less like an outsider. At the very least, you'll have friends to talk to at these sorts of events.

And don't be put off by a couple of bad experiences - you don't have to go back to that group, those people, that thing, but don't assume that all groups or events are like that. I've been to a number of events, techy or otherwise, that I didn't feel at home with. If, after two tries (in person, I'll give e-mails lists or chat rooms many more chances), I still don't get on with it, I try somewhere else.

There are still going to be times when you're not in your comfort zone, but this is probably healthy - pushing yourself a little leads to different opportunities. And in my case, it reminded me what it was like to be an outsider, a newbie. And that gives us greater empathy for people in that situation.